Veganuary: How to go vegan in 7 simple steps 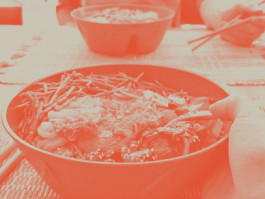 Every year, thousands of people worldwide sign up to participate in Veganuary – the world’s largest vegan movement, inspiring people to try a vegan diet in January and throughout the rest of the year.

But why go vegan? Especially when you live on the only planet that’s got cheese?

What convinced me personally was that it’s no longer contemporary to eat animal products.

My reasons to go vegan:

I could go into more detail about why I’ve personally decided on a plant-based diet. But if you’d like to know a little more about what makes a vegan diet more appealing, I recommend Jonathan Safran Foer’s book Eating Animals.

Now, if you’ve made it this far, you might be considering joining Veganuary this year. Here are my tips that make going vegan easier.

What is it you love to eat for breakfast? What do you usually have for lunch and dinner? What’s your go-to afternoon snack? And what’s your guilty pleasure?

Usually, no one eats something utterly different for breakfast every single day. And it could well be that you don’t have a special dish for every night either but rather that you rotate through 5 to 10 recipes you enjoy.

The easiest way to go vegan at home is by writing down what you usually eat and then googling what to replace it with. Usually it’s fairly easy to replace the different ingredients. And since I know that I can make scrambled eggs from tofu with a little bit of curcuma and kala namak salt, going vegan doesn’t seem that hard.

You don’t have to invent new recipes. At least not at the beginning. Eventually, and once you get more comfortable with replacing the different ingredients of your meals, it will be easier to experiment with what you eat.

2. Think about your rituals

Once you decide to go vegan, it’s not about eating less of something or giving it up altogether. Much more, it’s about having a better alternative – it’s about finding something you like even more. The tricky bit? You’ll need to revisit your rituals!

If you, for example, meet your friend once a week for coffee and a specific cake that happens to contain eggs, once you decide to go vegan you’ll have to improve that habit. You might want to suggest going to a different café or look for a different cake on the menu. It might also help to email the owner and ask whether it’s possible to include a vegan (cake) option on the menu. Sometimes it’s enough to just ask. You might not be the first person.

3. How to be a vegan in restaurants?

When I first decided to go vegan, I knew that I’d most likely be tempted to go for my regular choice once I stepped inside my favorite café or restaurant. That’s why I’ve gotten into the habit of checking out the menu online and deciding on what I’ll order beforehand. If I realize there’s no suitable meal for my chosen diet, I then ask my friends if it’s okay to go somewhere else.

What I should also mention here is that I used to eat at the cafeteria at my coworking space every day. Eventually, I just brought my own food and simply ate it there while sitting with my friends. No one ever said anything about it. Also, if you want to know more about how I prepare my lunch box, you can find an article about it here.

4. Breathe – you’re not being complicated

At the beginning, I felt anxious people would think I was being difficult. I didn’t dare ask for alterations to a dish I liked on the menu. However, I must admit, once I learned more about veganism and all the reasons to follow a plant-based diet, I’ve actually changed my mind. Now, I find it extremely important to have that conversation and be the person who brings it up.

Even if I go to a catered event and there are no vegan options available, I’ve learned to just ask. Many times, people have been in awe of what the staff served me. It always amuses me to think the other guests would have probably prefered to be vegan, too.

If there’s one thing that has changed since becoming vegan, it’s that my meals taste much better. Over time, I’ve gained the self-confidence to experiment and explore. I know what a topinambur is and that parsnips are to die for once you roast them in the oven. I know that you’ll melt once you taste chestnut fennel soup, and I also know that when you add a tiny bit of apple juice to the pan, your meal is most certainly always going to taste better. The most exciting thing about vegan cooking is that, once you start having fun in the kitchen, you’ll be pleasantly surprised by how incredibly tasty your meals can be.

6. But what about cheese?

I was one of the people that always said that I could never go vegan because of cheese. The thing with cheese is that it’s an addiction. The extremely high concentration of the milk protein casein in cheese induces euphoric feelings and lowers pain. Just like morphine and opium, casein – and, when digested, casomorphin – is an opioid.

From my experience, it takes about 3 to 4 weeks to break the addiction.

Now when I happen to eat a piece of cheese, I might think it tastes good, but I won’t crave it as much as I used to. It’s one of the things you’ll only understand once you’ve experienced it. And if that's not the case there've been so many vegan cheeze inventions that are incredibly tasty. You can always eat those.

For me, no cheese in the world is worth artificially impregnating cows for them to give milk – yes, a cow can only give milk if she’s pregnant. Which makes me doubt if cheese can even be considered vegetarian?!

B12 plays a critical role in many of the body’s most important functions. It’s generally not present in foods that come from plants and thus must be supplemented. Some people say it’s unnatural to supplement B12; however, what many don’t talk about is that B12 is usually given as a supplement to animals so that people don’t have to. It’s because animals must graze in order to take in B12 naturally, which – in modern husbandry – is not a given. And so, I’d much rather supplement B12 directly, agree?

Dare to join this year’s Veganuary? We hope so!