How self-herding hinders us from taking climate action 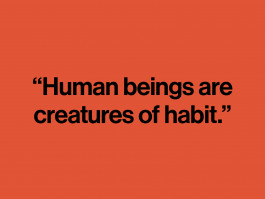 “Human beings are creatures of habit.” We probably all agree on this, but did you know there’s a name for it? Dan Ariely, professor of psychology and behavioral economics, coined the term self-herding. It basically suggests that we don’t really know what we want; instead, we just know what we’ve done before and repeat that behavior without thinking about why we did it in the first place. Which is why we make the same decisions over and over again, no matter if the consequences of that decision turned out good or bad for us or people around us.

If you think about it, you might realize that you always suggest the same place to eat to the same person, or you might always sit in the last row when joining a live lecture or go to the more expensive coffee shop because you simply don’t think about your choice anymore...or if you even have one.

How does that influence sustainable behavior?

This is actually a no-brainer: We trained ourselves in behaving climate-unfriendly because times were simply different and the pressure to change one’s behavior was not as great as it is today. We’re used to wasting resources or using them inefficiently or at the very least ineffectively. Mostly because we made unsustainable choices in the past, we’ll likely make them again in the present and future. Which is why – when it comes to sustainability – our cognitive bias has to be fought actively by redesigning our rituals and habits.

Here’s the good thing: While our behavior is being guided by our previous actions, it doesn’t seem to matter how big a decision was or how often you made it. Which means: Every single decision has the potential to guide future behavior and therefore establish itself as a habit or repeating pattern of behavior. We don’t – and can’t – think before we act every single minute or second of the day, but to overcome self-herding, we need to reflect every now and then and make a different decision than usual – at least once.

How self-herding can be used for good

While self-herding sometimes keeps us stuck in a loop of behavior patterns, we could harness it to change people’s behavior as well – especially after a “herding” behavior, which happens when we follow others and do something because we see others doing it.

Here’s an example: Imagine observing some of your work mates filling up their water bottles every morning rather than taking a bottle of mineral water. You follow the herd and imitate their behavior by taking a refillable water bottle from the cupboard.There’s a small sign thanking you for your climate-friendly choice and asking you to immediately put your name on the bottle after taking it. A simple choice, a simple action – yet a tremendous outcome because you’ll experience the good feeling of having made the right decision, of taking climate action. And you might connect emotionally with this identity, being someone who cares about our planet, which will make you take even more climate action in the long run.

Fast forward: You’ll probably never take a mineral water bottle again but stick to your more sustainable refill solution. As the system has been changed through nudging techniques in your workspace by – in this specific example – having refillable bottle waters provided by your employer and by seeing your work mates using them – your behavior will have changed, too. That’s why, before people can and will change, we need to put the right systems and solutions in place.

Change means intervention – and it’s incredibly hard to change yourself without an external agent. So if you want to start the conversation about how we can help you implement change in your company or organization, send us an email.