Looking back to move forward: Welcome to the New European Bauhaus 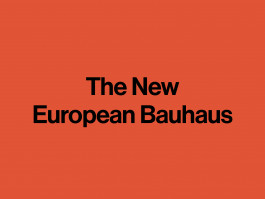 Every big change needs a movement. The European Commission (EC) makes the European Green Deal their priority to bring economic, environmental, and social benefits – prosperity for people and planet – while cutting emissions and energy poverty. To do so, EC president Ursula von der Leyen wants to bring designers on board from the very first second. A smart move!

Designers know how to solve problems creatively. While engineers often build on what’s working already, designers’ out-of-the-box-thinking can help create true innovation. And, as von der Leyen states, “Good design can improve lives.” We won’t disagree with that and are utterly surprised that a political institution is turning to designers – often neglected in everyday policy-making – to set up the New European Bauhaus. The plan is to think big and to create a forum for discussion and experimentation, a place for experts and citizens both on a global and local level.

The initiative wants to show and communicate how sustainable living is comfortable and attractive – and not a matter of sacrifice and regression. Very specifically, von der Leyen is talking about a “new European Green Deal aesthetic combining good design with sustainability.” The idea is a Bauhaus-like movement driven by designers, engineers, and scientists – as well as students – in order to reach out to the people of the European Union and to come up with ideas for a greener tomorrow.

101 years ago, the Bauhaus school brought together artists and architects, and their influence in product and industrial design, architecture, and communication design has been unparalleled. They reshaped the West – not only Europe but also the U.S. and the rest of the world by design. “Form follows function” has always been one of their core principles, and it’s time to move back to this idea in order to move forward. A systemic and symbolic vision is exactly what an often politically divided Europe needs today.

More than a purely technical approach, this is about what matters for people again

One of the five projects of the delivery phase of the New European Bauhaus will be about energy efficiency and mass building renovations – a critical part, as building operations and construction together account for some 39% of global greenhouse gas emissions. Until now, the EC was rather focused on measuring accountable details of buildings, but a new, less technical approach is in sight. Sure, technical data is relevant when assessing what’s being built or how to improve it, but at the same time it doesn’t have much to do with the quality of the building or the environment.

The Bauhaus was a democratization and emancipation movement that made design and urbanism more accessible. Today, there’s an opportunity for European leaders to fulfill the school’s unrealized potential. Coming up with a European style or design might be tricky or even impossible: What works in Germany doesn’t necessarily work in Spain. Also, a purely aesthetic-driven approach is not the solution for the pressing problems of our time; indeed, it probably got us where we are now. But gathering design and architecture experts around a table and involving them in policy-making is a great idea for sure. In the end, the New European Bauhaus is about how to think and how to approach problems.

If you want to kickstart innovation in your business or institution by implementing sustainable behavior through design, get in touch. We can help you spread ideas, redesign systems, ask the right questions, and find answers.